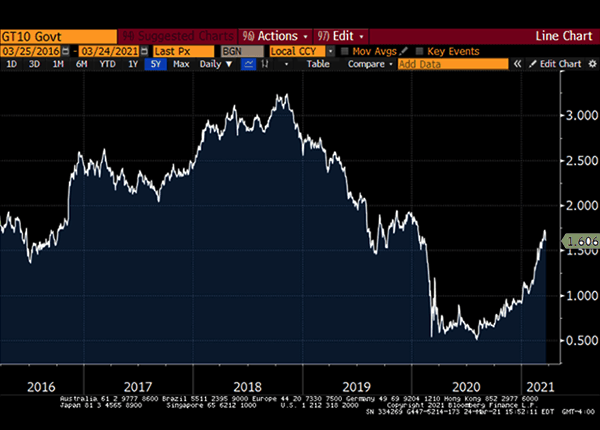 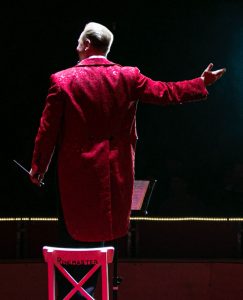 Once upon a time in a village, a man appeared and announced to the villagers he would buy monkeys for $100 each.

The villagers, seeing that there were vast amounts of monkeys around, went out to the forest and started catching them.

The man bought thousands of monkeys at $100 and as supply started to diminish, the villagers stopped their efforts. The man then announced that he would now buy at $200. This renewed the efforts of the villagers and they were back to capturing monkeys.

Soon the supply diminished even further, and people started going back to their farms. The offer increased to $250 each and the supply of monkeys became so scarce that it was an effort to even see a monkey, let alone catch it!

The man now announced that he would buy monkeys at $500, but he had to go to the city for business and his assistant would now buy on his behalf.

While the man was out, the assistant told the villager; “Look at all of these monkeys in the cages the man has collected. I will sell them to you for $350 and when the man returns you can sell them to him for $500 each.”

The villagers rounded up all their savings and bought all of the monkeys.

They never saw the man or his assistant again, only monkeys everywhere.

Feels a bit like the current monkey business in meme stocks, and a host of other “hot” items.

The Man Has A New Monkey

The story above is one that has been floating around for years.

But the modern day “man” has been selling his goods to all the villagers sitting home during the pandemic.

Non-fungible tokens. These monkeys utilize the block chain to prove ownership of original pieces of internet “art.” The piece by Beeple below sold for $69 million (he never sold a piece of art for more than $100). And Jack Dorsey’s first Tweet went for $2.5 million.

AMC just announced they intend to offer an additional 500 million shares of stock, while GameStop intends to offer 3.5 million shares. Not sure if the villagers will be around for the man this time.

A cautionary tale of Hertz. Remember last year when Robinhood traders piled into the company? Hertz, on the brink of bankruptcy, saw its shares move up 9X.

Hertz realizing all the dumb villagers, issued stock. Hertz entered bankruptcy and those shares are worthless… oh that Hertz.

The US equity market posted positive returns for the quarter, outperforming the developed international markets as well as emerging markets. Market participants cheered on the push for higher levels of vaccination as well as the government’s printing press.

There was a heavy rotation out of growth stocks to value. Most of that was the “opening up trade.” With the vaccines coming on strong, market participants were eyeing companies that would benefit. Value stocks tend to be industrial, materials, travel, and banks. Value outperformed growth across large and small cap stocks.

The other side of the “opening trade” and the government’s largess is the fear of inflation. Bonds can be a terrible place to be if inflation starts to rise. Rates move as suspected inflation levels change. The belief in inflation caused rates to move higher. It was not necessarily the level that rates ended; it was the swiftness of the move. 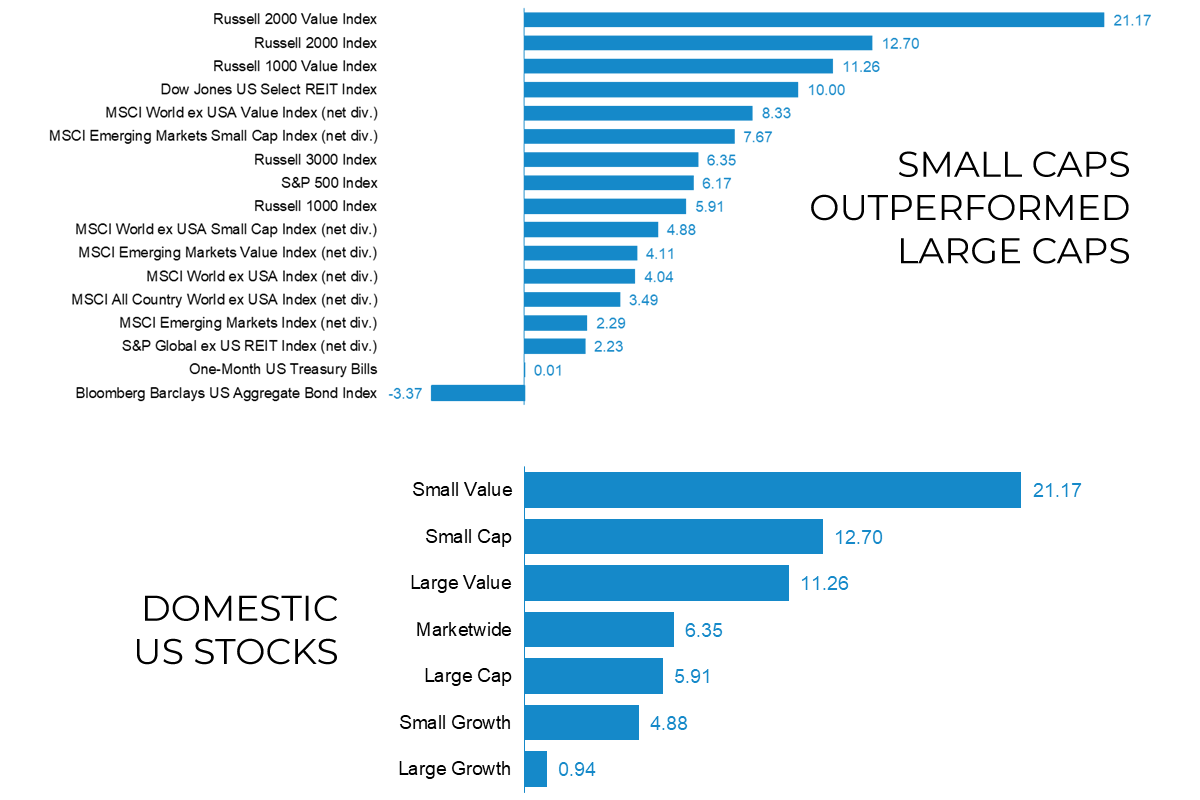 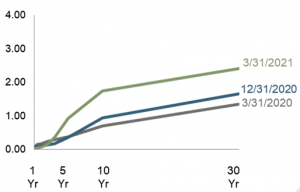 The villagers seem to be going back to their farms and slowly walking away from the monkey business.

NYSE volumes are at 80% of the 30-day average while the Nasdaq is at 90%, and GameStop is far off its January high. The pandemic cleared calendars, boosted savings, and led many to the stock, crypto, sneaker, and baseball card markets.

The top searches on Google are now for “airlines” and “hotels,” not GameStop, Bitcoin or NFTs. Boredom may be over; calendars are filling up and money will be spent. The rotation out of the high-flying stocks and sectors makes sense. Currently, the new rotation is to companies that have actual earnings and are not on the brink of bankruptcy.

We are glad to get out and travel, meet face-to-face with clients and see rational stock buying.

We hope to see you on our Quarterly Market Call on April 21st at 1:00 PST. We will expand on these and other topics.

Should you have any questions in the meantime, we are here for you.