Market Update: Does one and one make three? 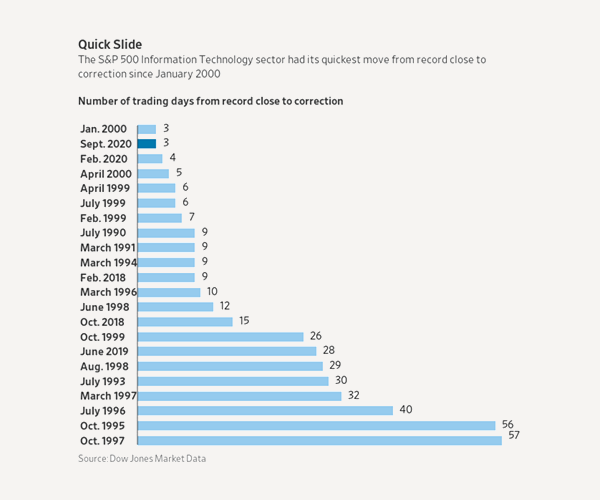 I am looking at the market and I am looking for you. Those that took the free ride are now through. What happened in September? To name a few; Starbucks Pumpkin Spice Lattes, football, and school. Two out of those three – football and school – could be responsible for the summer free ride.

Time to get back to your day job, whether that is a student or gambler. Sure, the Fed and the government’s largesse has helped propel the markets… do not fight the Fed.

But thanks to the growth of commission-free trading and fractional share ownership, the retail investors now account for 20% of equity trading. Retail traders were major buyers of call options (the right to buy a certain stock at a certain price in the future). These options were notable in a select few stocks that have had stratospheric climbs.

No sports to bet on? Fine, they will take the ‘over’ on TSLA. With the gamblers and students back at their day jobs, the S&P 500 started off September with the quickest correction (10% down) since 2000.

Those on the “free ride” have pushed a few stocks to new heights. The tale below shows the real market return. If it were not for 5 top stocks in the S&P 500, things would look different.

In fact, were it not for those top five, the S&P would be almost flat. The spread between the stocks is rather large. Everything in life comes back to average, as nothing can go up forever. Will the top stocks continue to lead, possibly, but most likely not over the long-term. 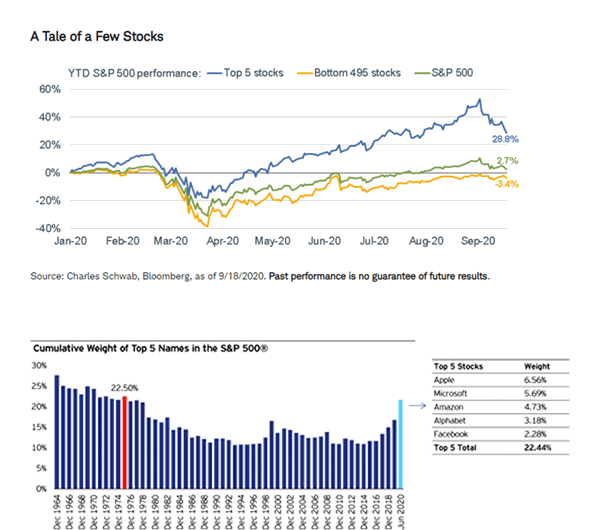 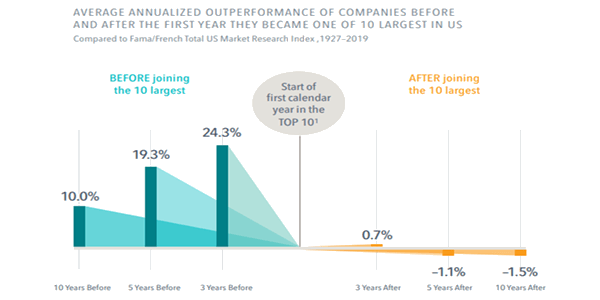 Source: S&P Global and Bloomberg, L.P., as of Aug. 7, 2020. In 1975, the top 5 holdings were IBM, Proctor & Gamble, Exxon Mobil, 3M, and General Electric. An investment cannot be made directly into an index. Holdings are subject to change and are not buy/sell recommendations.

Stocks had a nice quarter with the larger growth type stocks posting gains even with the disappointing beginning to September.

Value stocks continue to claw their way back for the year. Investors went beyond the US border in the third quarter as emerging markets log the top spot. 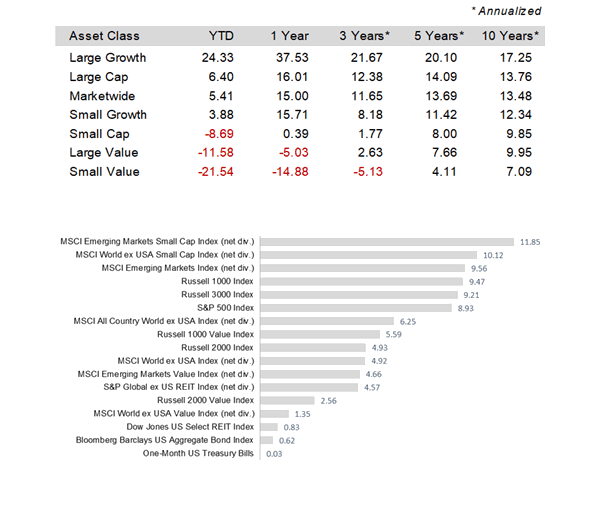 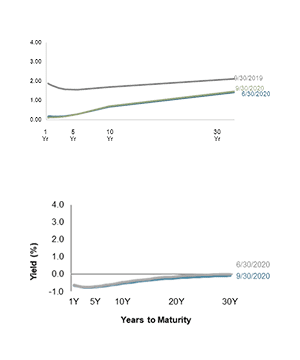 Good for mortgage holders, bad for those with bank savings accounts. As bad as those rates appear, at least we are not Germany. German bondholders need to go out 20 years to get positive rates.

This is obviously a hot topic, as there are plenty of “what if” scenarios. Below are actual outcomes from Investing in your “team” versus staying invested in the market. We deliver this to show that just like most noise in the markets, it is generally good to avoid making decisions based on conjecture.

The best annual gain comes from the scenario of a Democratic President and a Split Congress with a return of 10.4% per annum. Problem with that scenario is that it only happens 3.4% of the time, and it was just the four years during the Obama administration from January 2011 – January 2015.

Source: Charles Schwab, Bloomberg, as of 10/2/2020. For illustrative purposes only. The above chart shows what a hypothetical portfolio value would be if a hypothetical investor invested $10,000 in a portfolio that tracks the Dow Jones Industrial Average on 1/1/1900 under three different scenarios: a Republican presidential administration; a Democratic presidential administration; or staying invested in the market throughout the entire period noted. Chart does not reflect effects of fees, expenses or taxes.

Bill Dodds was quoted as saying “Labor Day is a glorious holiday because your child will be going back to school the next day. It would have been called Independence Day, but that name was already taken.”

So, as we begin October, which can be a tough month, did we get our independence from the retail gambler? Are we back to rational long-term investors?

November will come and go, markets adapt, and investors adapt; we suggest investors should not materially adjust their portfolios based on market prognostications. Does one and one make three?