Speaking of nine, they say only about one-ninth of an iceberg is visible, the bulk remains hidden beneath the surface. You do not need to be Edward John Smith to understand that. We at Spinnaker have been thinking about what lies beneath.

As we have stated for some time, we do not anticipate a recession on the horizon. Rates are low, inflation is low, the Fed is accommodative, and we are heading into an election year. However, what lies beneath has us filing out a float plan.

The current driving force of this economy, the consumer, is testing their tensile strength. Experian data shows that 38% of new car buyers in 2019 took out loans of 61 to 72 months. More distressing, their data shows 32% of car buyers are taking out loans between 73 and 84 months – that’s six to seven years. A six to seven-year-old car will have some wear on it as it will likely have roughly 75,000 miles. Further, research by R.L. Polk says the average length of time drivers keep a new vehicle is 71.4 months — around 6 years. Why is this a bad thing and what does it say about the consumer? 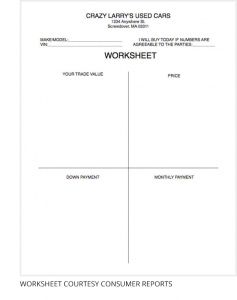 Most car buyers have seen the sheet seen here. The salesman comes out with a sheet of paper that is divided into four sections. Most buyers are focused on the bottom right, their monthly payment. The salesman (and the finance department) will “tweak” the numbers to get you your desired payment. But focusing on payment, the consumer doesn’t realize they may be paying too much for the car, receiving too little for their trade-in or paying a high interest rate.

Back to the consumer. The concern with such a large percentage of buyers taking longer term loans, shows the load the consumers are under is pushing their capacity. Further, if the average buyer holds a car for six years and their loan is seven years, that implies that many will be rolling prior debt into the new loan, compounding the problem.

A tip from your friends at Spinnaker, start with the sales price. Grind the dealer on that.

Disruptions in the economy generally do not come from the same issue. At the beginning of the aughts it was the tech crash, in 2007 it was housing, so the question now is where will the next disruption arise? Goldman Sachs reports just 24% of companies that have gone public in 2019 are profitable. Companies are expected to produce the lowest profits of any year since the Dotcom bubble.

How about WeWork? Not long ago, the valuation was touted at $47 billion. Then investors shrugged and WeWork was within days of extinction. In pranced a white knight, their largest investor Softbank, to bail them out. It has been reported they are losing $219,000 an hour, in 2018 their losses and revenues doubled. WeWork has a substantial check to write every month for the leases they hold. They generally take out long-term leases, then sign up “members” to short term leases. This poses major problems with any slowdown in the economy. Will they default on their lease and will that start to put pressure on the valuation of commercial real estate? These are questions that we do not have answers. However, if we were to guess where a bubble could be, you may find it in some of the latest unicorns.

Part of the pirate’s code states, “if any man robs another, he shall have his nose and ears slit, and be put ashore where he shall be sure to encounter hardships.” What the pirates were saying was don’t steal from other pirates. The venture capital community (the unicorn herders) lives by those tenets. Once they are done pulling the value out of a company, they push it out to the unwitting investing public.

Many years ago, I wrote down my own creed to protect our investors from the pirates. Below are a few that are relevant today:

• Things will get worse. Be bold and sell the position
• It is ok to pay a capital gain
• Refuse to look back. Regret avoidance

We are on watch, looking for danger ahead. We anticipate continuing to add to dividend paying stocks in the large, mid and small cap space. We are also reviewing our bonds to see if any of our holdings need to walk the plank.

If you have questions or feel you need to take Dramamine, our advisors are waiting and willing to meet with you.